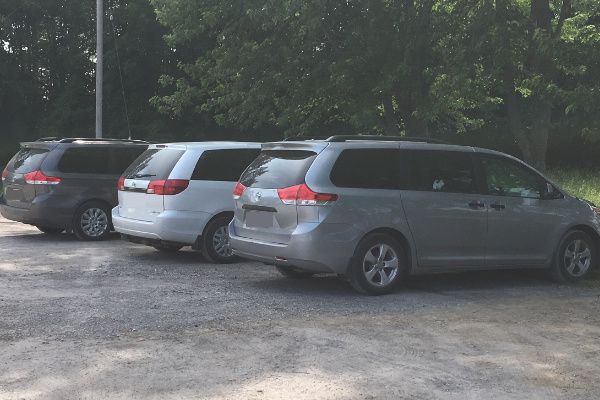 Is there a financial decision that people agonize over more than buying a vehicle?

A house is undoubtedly a bigger purchase, but it isn’t one that comes along as often, at least not for most people.

I often find myself in conversations with friends and colleagues who are trying to figure out how buy a car without it breaking their budget. Most fail miserably.

There are so many decisions to make.

How much should they spend?

How will it be financed, through their bank, or through a dealership?

If it’s a used vehicle, how old is too old?

With so much to consider, it can easily become a case of paralysis by analysis.

And for good reason.

Transportation costs make up one of the “big 3 expenses” for most families, along with housing, and groceries. And let’s face it, no matter how little you spend, a car will almost always feel like a money pit.

Such a complicated problem requires a simple solution.

A number of years ago, I came up with an easy-to-follow rule, one that takes a lot of the guesswork out of deciding how much to spend on a vehicle.

Following this rule when you buy a car will ensure that transportation expenses don’t swallow up your paycheque. The best thing is that the rule works for families across most income levels.

Before I delve into the experience that led me to the $1500 rule, here’s how it works, in all its simplicity.

The rule is this: The purchase price of a vehicle (taxes included), shouldn’t exceed $1500 per year, when averaged over the number of years you own the vehicle.

The rule applies regardless of vehicle type (car, truck, SUV), or whether it’s new or used.

Note: It doesn’t account for operating costs such as fuel, or maintenance, due to their variable nature, understanding that operating costs should always be considered when shopping for a car. Remember, we’re keeping this simple.

Now, if you change your mind, and decide to sell the car after only 5 years, you can do so and stay within the $1500 rule.

Like so many great ideas, the $1500 rule was the result of miserable failure.

The year was 2008, and my wife and I decided it was finally time to buy a minivan.

You know what I’m talking about, that moment every parent with more than 2 kids experiences.  It’s the “I give up, I surrender, I will never be cool again, it’s time to buy a minivan.”

We die a little bit inside, until we realize it’s the greatest thing ever invented.

We were those parents.

We had a young family, and the novelty of cramming three car seats into a Toyota Corolla was beginning to wear off, big time.

Unfortunately, rather than staying within our means and buying a used van, I financed a brand new, $36,000 Toyota Sienna. To this day, it was the nicest vehicle I’ve ever owned, but it was way out of our budget.

For four long years, I felt completely weighed down by the $450 monthly payment.

Related Post: Would You Buy Your Child Their First Car?

I came to the point where I realized something needed to give. But was it too late to correct a poor financial decision? I felt like the damage had already been done.

One day, the van went into the shop for some routine maintenance. I think it was brake pads and an oil change, something like that.

I was on my way to work, so I took a shuttle from the car dealership over to my office.

The “shuttle” was an older model Toyota Sienna, the same vehicle we owned. As we were driving, I noticed how quiet and smooth it ran. I knew it was 8 or 9 years old, but it felt just as solid as my much newer, more expensive model.

I was very surprised. I actually remember leaning over to check the odometer. I was shocked to see that the “shuttle” van had over 300,000 miles on it.

I made a comment to the driver about the van’s mileage, and mentioned how nicely it drove. He agreed, and said that the mileage was, in fact, one of the reasons they used it as a shuttle. To the car dealer, it was the best kind of advertising you could ask for.

This got me thinking.

Why was I driving around in such an expensive vehicle, if I could replace it for a fraction of the cost, with something that could deliver the same amount of versatility and almost as much comfort, and still last for several years.

So I started doing the math.

I realized that I could sell the van, get rid of our enormous loan payment, and still have more than enough funds remaining to buy an older model, one that could last us for several years.

I talked about it with my wife, and we decided to sell the van. Even though the numbers made sense, it was’t an easy decision.

The remaining $3500 went towards some other debt.

At the time, my goal was for our new (used) van to last at least 5 years.

In my mind, an average annual cost of $1500 was reasonable, much more so than putting down a huge downpayment and still forking over $450/mth.

Being able to pay with cash, and avoiding the monthly payment altogether made it even better.

We’ve had our van for seven years, the odometer having recently crossed the 200,000 mile mark. It’s shuttled our family of five on numerous cross-country road trips, and has required only routine maintenance.

I’ll never get back the thousands I wasted buying a brand new vehicle I couldn’t afford. But by being willing to correct a money mistake, my wife and I immediately improved our financial situation.

Wondering how I decided on the figure of $1500? Here are a few reasons:

It works with a broad range of incomes. Car ownership is not a practical choice, or an economic reality for everyone. I get that. By using the $1500 rule however, you don’t need to earn $80,000/year to make it fit into the budget.

There are other factors to consider, but in a world where the average car payment is $500/month, anyone applying the $1500 rule for car buying will look pretty money savvy, regardless of income.

Related Post: Your Pickup Truck Is Driving You To The Poorhouse

It favours used vehicles over new. In other words, it encourages people to spend less. Paying $45,000+ for a pickup truck or luxury SUV is a bad financial decision. Sorry, but it’s a fact. There’s simply far too much depreciation during the first 2-3 years after a new vehicle drives off the lot.

Been there, done that.

Unless you plan on owning said truck or SUV for over 30 years, it won’t meet the criteria for the $1500 rule. In other words, abiding by the rule can help ‘steer you away’ from making a big money mistake…pun absolutely intended.

It’s allows for flexibility with the purchase price (to a point). The longer you own your car, the easier it will be to get the average annual price down to the $1500 level. Keep in mind however, the more you spend, the longer you’ll need the car to last.

In this price range, it’s easy to find well maintained vehicles of all types, makes & models, that you can expect to have last for several years without high incurring maintenance costs.

And don’t let the number of miles on a used car scare you. If it’s a reputable brand, such as a Toyota or Subaru, a car with over 125,000 miles has plenty of life left in it.

But use caution. Before buying, always have a car inspected by a mechanic you trust, to make sure there are no surprises waiting for you. It’s worth the time, and the 100 bucks it will cost you.

The short answer would be that yes, it is possible, in fact, I was successful in doing this with a car I bought new, long before I came up with the rule.

Realistically however, the instances where this would work are very limited. You really would need to buy a vehicle for less than $20,000, taxes in.

With new cars, your options are limited to base model compact or subcompact cars, such as a Toyota Corolla, or a Honda Fit. Both great cars, by the way.

You would then need to own the car for 10+ years, and also realize some resale value when you sell it.

Alternatively, if you drove it into the ground, and couldn’t sell it for any value whatsoever, you would need to own it for 13 years, just to get under the $1500 limit.

The $1500 Rule For Car Buying: Things To Consider

Be realistic about how long the car you’re buying will last.

Last year, my son bought his first car, and old Mazda. He paid $1800. As you can imagine, it is transportation at its most basic. That’s ok, because neither of us had an expectation of the car lasting  for 5 years.

Applying the $1500 rule, my son only needs it to last about 15 months. Anything beyond that is bonus time.

He just passed the one year mark, and it’s still running smoothly, so here’s hoping.

In this day and age, cars are more well built than ever. Still, some brands are consistently more reliable than others.

If you’re buying a used vehicle, you should favour brands known for their reliability.

This will improve your odds of owning the car for a number of years, and successfully applying the $1500 rule. Hopefully, it will also keep your maintenance costs down.

I’m partial to Toyota, as they recieve top marks for reliability throughout their product lineup, but there are other solid brands out there. 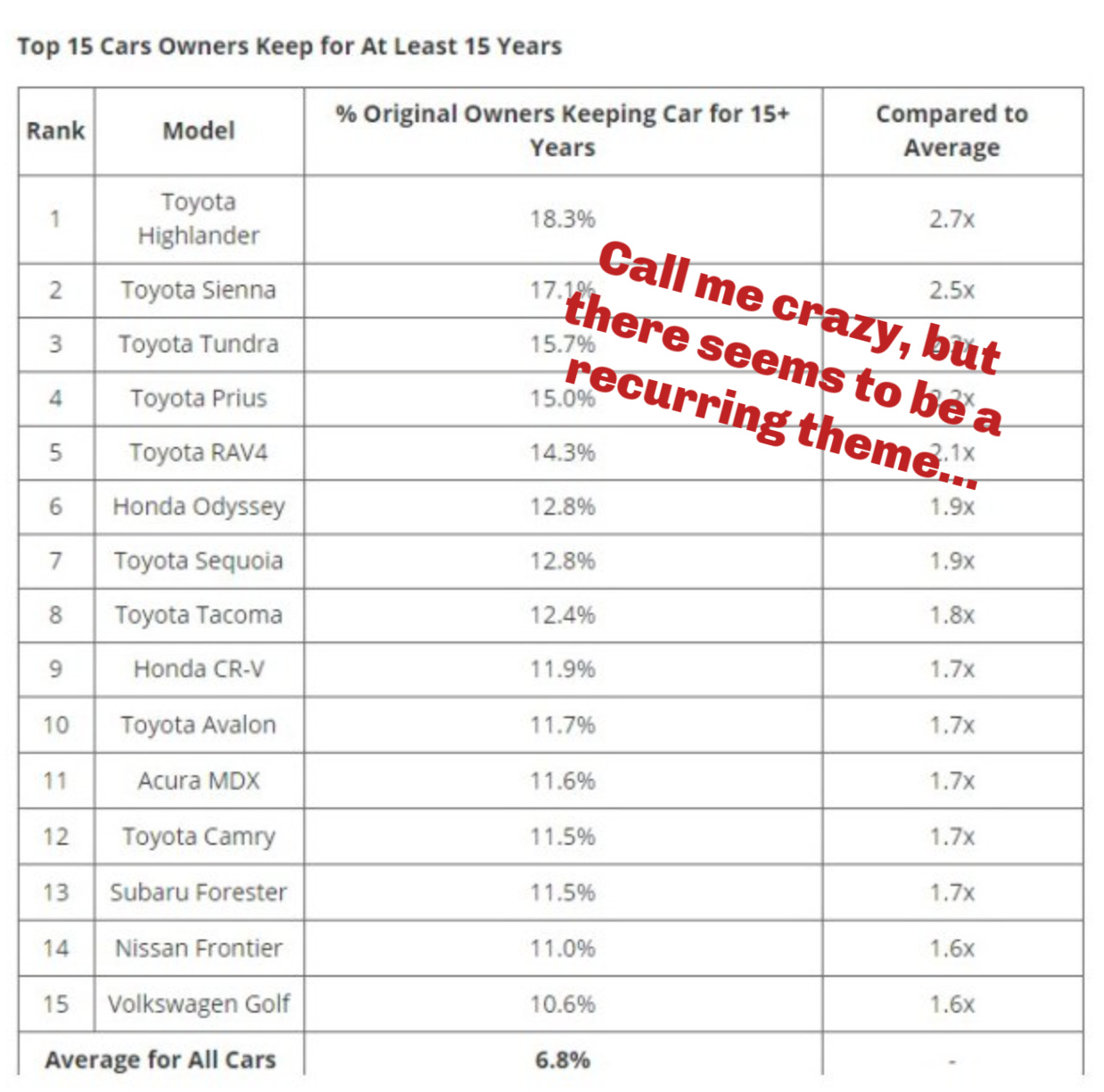 Another Rule For Car Buying

I’ve heard plenty of opinions on car buying over the years; some good, some terrible.

Another rule that I think is very sound, is that you should spend no more than 1/10th of your gross annual income on a car purchase.

While that sounds like a paltry sum, when you factor in all of the operating costs of owning a car (insurance, fuel, maintenance), it makes a lot of sense for someone on a lower income.

Similar to my $1500 Rule, the 1/10th Rule helps to ensure that a person’s transportation costs remain low relative to your overall income.

What has your experience been?  Do you prefer to buy cars new, or used?

SIGN UP HERE TO GET ALL NEW POSTS, DIRECTLY TO YOUR INBOX!