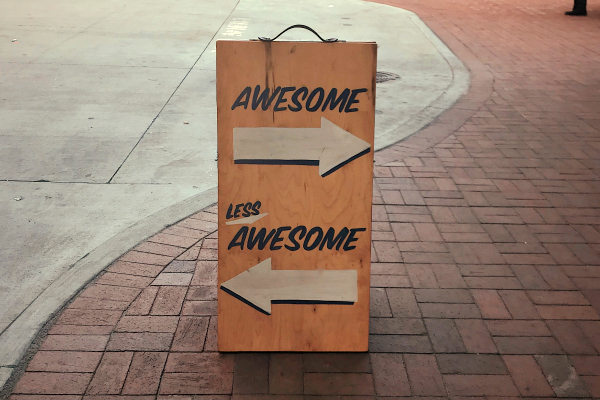 I’ve spent the past four weeks in what felt like the world’s longest holding pattern.

I’d been waiting on a decision that would have brought with it some major career and life change.

Here’s how it all went down:

In late July, I got a phone call from my boss.

He mentioned that a national level manager was having trouble finding a suitable candidate for a vacancy in their department.

They had drawn from a pool of applicants in a couple of large cities, were underwhelmed by the quality of candidates, and decided to extend their search outwards.

By a couple thousand miles.

My manager was asked if he had any direct reports he could recommend, and my name came up.

And so, here he was, calling to let me know about the potential opportunity, and find out if I would be interested in putting my name forward.

A few months ago, he and I had sat down for a routine career conversation. And while I didn’t tell him outright about my plan to climb down the corporate ladder, I did share that I felt my priorities were shifting.

Career wise, advancement and financial gain have taken a backseat to wanting more control over my time.

This new role, which came completely out of the blue, seemed to fit the bill perfectly:

I Applied For A Demotion

The new job would be one level below my current one. It would involve sacrificing some upward range in the salary band, although my actual salary wouldn’t change.

For me, it was purely a lifestyle move.

And from a lifestyle perspective, the advantages of the new role were significant.

By my estimation, I would take back 15 hours of time every week, by ditching the daily commute as well as the additional hours required by my current job.

I could then invest those 15 hours how I see fit. More time for family, fitness, as well as the blog and side hustles.

And it wouldn’t be without its financial benefits.

Working from home would save our family hundreds of dollars per month; mostly on the cost of commuting, but also on things like not having to buy work clothes, and occasional eating out etc.

We would also sell our car and return to being a one vehicle family.

After discussing the opportunity with my wife, and tossing the idea around for about 5 minutes, I decided to go for it.

I emailed the hiring manager, who sent me an invite for an interview.

I don’t really know how to best describe what transpired over the following 4 weeks, but here’s a summary, in a nutshell:

A week goes by. Nothing.

I wait another week.

So, while no one ended up getting the job, it certainly feels as though I was turned down for a demotion.

If the posting does reappear, I’ll consider putting my name forward again, but after that experience, I’m somewhat less inclined.

What I Learned About Myself

I would by lying if I said I wasn’t disappointed, but not getting the job didn’t rattle me as much as I thought it would.

Perhaps my expectations were tempered due to the ridiculously long wait, I’m not sure. I should note that I still very much enjoy the job I have now, but I’m ready for a change.

Either way, the experience allowed me to make the following observations:

I spent a month in a state of complete suspension. Throughout the entire process, I found myself unable to initiate even the smallest of tasks. It was a feeling I’d never had before, at least not to this degree.

For example, I had been planning to call and cancel our cable, something that only takes a few minutes, but I put it off.

I stopped blogging completely, and I didn’t get to the gym.

It’s as though psychologically, I couldn’t move forward until a decision was made, no matter which way it fell.

I have some apathy to deal with. Being forced to consider the logistics of working from home uncovered a major irritant I’ve become apathetic about.

That is, the sheer amount of time and money I spend by not living close to where I work.

This is something that should bother me, but because it’s been this way for so many years I’ve gotten used to it.

So, instead of shrugging off my 90-minute, 70 mile, daily round-trip commute as an opportunity to focus or unwind, I should view it as a problem that requires a solution.

This doesn’t mean that we’re going to up and move next door to my office, but there are other ways that I can create efficiencies, such as adjusting my work schedule.

Side hustling has transformed my mindset. When I finally got the call this week, I didn’t feel terribly disappointed. That surprised me, given the enormous benefits that would have come with working from home.

This is a testament to how my mindset has changed since I began blogging and side hustling.

Because I’ve found ways to be creative and make money outside of my 9-5, my career is no longer the be all and end all when comes to making a living.

Subconsciously, I know that if something doesn’t go my way at work, it’s ok, because I’m creating additional revenue streams and am less dependent on career success.

By the way, the first thing I did after being turned down for a demotion?

I called to cancel my cable.

I would love to hear from you!

Has your life ever been put on hold, as you’ve waited for a resolution on something big?

How has side hustling changed your career mindset?