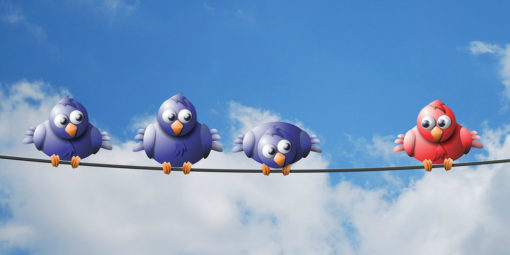 A few weeks ago, I came across a blog post titled The Half-Normal Challenge by Mr. Groovy, who blogs alongside Mrs. Groovy at Freedom Is Groovy. Don’t let the funky cat sporting John Lennon spectacles fool you, the guy is a serious writer.

In the article, Mr. Groovy identifies a lifestyle that’s considered ‘normal’ by North American standards. The typical fancy house, the fancy car. We live in a society that says it’s normal, even healthy for these material things to become our primary pursuits. He goes on to argue that by choosing a more modest lifestyle, not only are you NOT sacrificing your happiness, you are avoiding a lot of misery. He uses what he’s titled the “Half-Normal Challenge” to drive his message home. It’s great writing that provides a very effective illustration.

You see, great writing doesn’t simply make a point. It goes a step further and creates a jump-off point. It sends the reader on a journey, beginning a process of self-discovery, should they choose to engage.

Mr. Groovy’s post did just that. It got me thinking about what’s considered a ‘normal lifestyle’ in our culture, and about how society assumes we are all striving for the same material standard, whether some reach it or not. It’s why some of my peers can’t understand how, as a family of five, we can choose to live in a 60 year old, 1200 square foot home. You wouldn’t believe the looks I get when I mention that my wife and I share an iPhone. I consider these to be minuscule sacrifices. There are people who are far more minimalist than our family, to be sure. I can’t imagine the reactions they get.

With that in mind, and building off of the “Half-Normal Challenge”, here are several reasons you should NEVER strive to be normal:

Normal is often rooted in fear.

The reason that many people make buying stuff their primary pursuit in life is because they’re afraid of something.

You see, I believe that most people have at some point dreamed big dreams. People don’t set out to simply strive for superficial things. They want to have a purpose, a dream to chase after. The problem is that dreams come with uncertainty. There are no guarantees.

The path of a dreamer needs to be forged. Often, fear causes people to give up on their dreams before they even start. It could be a fear of failure or rejection, you name it. As a result, many simply divert to materialism, or what society seems to believe is normal.

Why is this? You see, the path of the normal life is broad and well worn. I’m not saying it doesn’t require hard work, material success often does. But the formula is easy to follow:

Get an education and a good job where you can climb the corporate ladder. Once you’ve spent a few years doing this, you can then leverage your income-earning ability and strong credit rating. This will allow you to borrow hundreds of thousands of dollars to build your dream home, buy a fancy car, and over time a host of other nice things.

My feeling on all of this? Don’t give in to fear, you have too much to lose.

Regret is what you feel when you’ve abandoned your dream. You’ve stopped chasing and defaulted to the formula I’ve described above. The place in your heart where a fire once burned, where a dream once resided, becomes filled with material success. But it’s only a substitute, and it’ll never replace the real thing.

Many people realize it all along. For others, it may take years to understand.

For some, it’s possible they’ve pushed their dreams so far down, that the truth will never reach the dark places where they lay hidden.

Currently, the average price of a home in America is close to $300,000. The AVERAGE price! In Canada, it’s closer to $400,000 USD. This means that millions of families are buying homes well in excess of these numbers. According to Mr. Groovy’s post, the average new car cost $33,560, and the typical couple spends $26,000 on their wedding!

That’s the price of normal in North America! Let me tell you, the cost is far greater than dollars and cents. By chasing after normal, people are losing their freedom, their marriages and relationships, and their futures. Pretty serious stuff.

Believe me, the numbers alone are a compelling reason to never strive to be normal.

Keeping up with the Joneses won’t make the world a better place. In fact, it may make it a little bit worse, due to the environmental damage caused by our wasteful society. I read somewhere recently that Americans throw away almost as much food each year as is produced in all of sub-Saharan Africa! America is home to 3% of the world’s children, yet they consume 40% of toys manufactured globally.

“Men are anxious to improve their circumstances, but are unwilling to improve themselves; they therefore remain bound.”     – James Allen

This quote says it all. You can work to have the nicest of everything, but if you’re not learning, not growing, you’ll remain stagnant. Remind yourself of the dreams that you once had. Will acquiring a bigger house or impressing your friends with a nicer car move you closer to your dreams, or keep you further from them? You may be pursuing a ‘normal’ life, but YOU are not. You are unique, so you should live that way. The environment you live in has got it’s priorities messed up. To say our society is broken and diseased isn’t a stretch. It’s as though our consumer society has captured millions of otherwise unique individuals, and attempted to cram them into the same, static mold, mindlessly shifting from one trend to the next, hoping that someday they will find that sense of purpose and fulfillment.

“And the day came when the risk to remain tight in a bud was more painful than the risk it took to blossom.”     – Anais Nin

You have a choice. You can strive to be normal, or you can be so much more.