This past week, I took my sixteen year-old Honda lawn mower to my local small engine repair shop.  Earlier on, in an effort to diagnose why it wasn’t running smoothly, I had taken the carburetor apart, only to discover that the pin holding the float in place was missing.

I have no idea how that can even happen.

Regardless, I replaced it with a new pin that looked to be the same size, but no matter how much I tried, I could not get the float to function again properly.

So with the carburetor still in pieces, I brought it in to be looked at.

Now, the repair guy is fantastic.  He’s actually the father of a friend of mine.  He’s been retired for many years, but now spends his time fixing lawn mowers, and other small engines out of the garage of his home.

He had my mower for about a week, and ran into the same problem I was having.  He couldn’t find a pin that fit properly on the float.

What he ended up doing was taking a carburetor from a different mower, and installing it on mine.  While it was a different make and model, it ended up working just fine.

He charged me $40, though I insisted on giving him $60, as I was expecting the bill to be higher, and I suspected he was undercharging me.

Getting To The Point 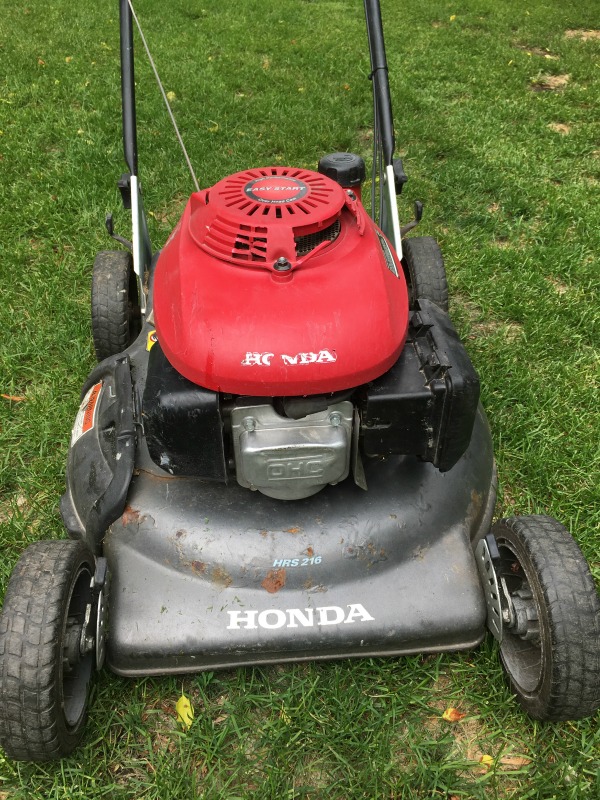 So, you’re probably wondering, what’s the point to all of this.

Well, while I was waiting for the mower to be fixed, it crossed my mind to simply buy a new one.  After all, I had spent hours trying to troubleshoot the issue on my own.  I even remember saying to myself, “this thing has given me sixteen good years.  It doesn’t owe me a penny.”

And you know, I could probably be forgiven for having that mindset.  Replacing any product after sixteen years hardly qualifies as wastefulness, or having a throwaway mentality.

But by extending the life of my mower for a very reasonable cost, $60, in essence, I was able to kick a much larger expense further down the road.

And if we assume that my alternative was to buy a new mower, (though I usually buy items used) a similar model would cost me north of $400.

Here’s what it boils down to.

By resisting a throwaway mentality in the case of my lawnmower, I not only exercised good stewardship, but I saved money.  And the more I choose to do this, as I encounter other opportunities to make an item last rather than throw it away prematurely, the more money I’ll save.

Unfortunately, this mindset is increasingly rare in today’s world.

One of the truly negative influences of consumerism is our society’s embrace of the throwaway culture.  In fact, this mindset has so permeated our way of thinking, that it’s moved way beyond the products we consume, and has even begun to affect the value we place on human life itself, which is absolutely heartbreaking.

Sticking to the subject of material consumption, and it’s effect on our personal finances,  there are countless items you and I consume everyday that we treat with a throwaway mentality.  Not only is it wasteful, but it’s costing us a lot of money.

You need proof?  Look no further than your refrigerator.

It’s said that up to 50 percent of all global food production is lost to waste.  In North America, with our efficient farming techniques, and modern food production systems, it’s at the consumption stage where the waste is happening.

That’s you and me.

And aside from the ethical issues, (we’re not only wasting food), we’re wasting money; the expired produce, or meat, or stale bread, or leftovers that become forgotten about a just bit too long, adds up.

In our home, we combat  this by making sure that fruits and vegetables that are slightly less than fresh end up in smoothies and juices.  But leftovers and old bread still get thrown out from time to time, so we definitely have room to improve.

Let’s look at some other ways to save money by resisting a throwaway mentality.

If you’ve ever purchased a new car, you know that as soon as the warranty expires, or after three years, whichever happens sooner, the car dealership will come calling.

You’ll hear about what a great time it is to trade in your ride, and the sheer number of customers who are willing to pay top dollar for models just like the one you own. After three years!

The average length of time a person keeps a new vehicle is about five years.  While that might not sound terrible on the surface, keep in mind that most modern cars are quite reliable, and with the proper care can easily last upwards of 10-12 years.

In fact, we have a fourteen year old vehicle in our driveway that we’re about to take on a 4000 mile road trip.  It drives beautifully.

According to my very off-the-cuff calculation, the average person disposes of their vehicle before it’s reached 50% of its lifespan.

The bottom line?  If you’re looking for ways to save money, own your car as long as it’s economically viable.

How about your smartphone?  I know, sensitive subject.  I know people who spend hundreds of dollars to buyout their phone contract in order to upgrade to the newest phone as soon as it hits the market.  And they repeat the cycle every couple of years.

In most cases, their current phone still works perfectly fine.  So, what are they buying?

A shiny new smartphone is a way for the masses to feel as though they’ve achieved some increased level of status.  They may give your another explanation…the screen is larger, the resolution is sharper, or the camera is clearer.

But, it’s just status.  I should know, I’ve done it myself.

What I’ve learned however, is to resist the urge to always be upgrading.  Instead, allow your phones, and your cars, and your lawnmowers to live out their full life cycle.