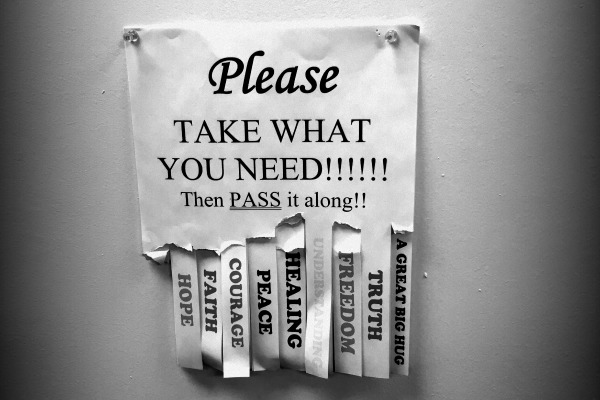 Editors Note: This post touches on the very serious issue of abuse, which is a tragic and all-to-common reality. While it is a partial recounting of a story that was told to me this week, I can understand that it may make for difficult reading for some. Personally, hearing the story firsthand was nothing short of heartbreaking. Thankfully, it was also a story of hope, and love. Names involved in the story have been changed. MMM

“Just don’t hit her on the head or the back, my mom pleaded!”

As the woman standing in front of me recounted the horror, all I could do was close my eyes and shake my head. There wasn’t a dry eye in the room.

This past week, I had the opportunity to visit “Flourish”, an inner-city community resource centre. Flourish is a non-profit agency delivering vital support to the city’s most vulnerable, with programs for women, pregnant women, men, and children of all ages.

I was part of a group representing a number of corporate donors, and we were given a first hand look at some of the incredible work Flourish is doing with the funding that is provided.

With facilities spread across a few buildings within a city block, we toured a thrift store, a daycare, health clinic, and counselling centre.

Our visit culminated with a soup and sandwich lunch, as we listened to a presentation from the centre’s director, as well as one of its staff.

The staff member’s name was Christine, and she was there to share her story.

Christine told us how she came to Flourish shortly after losing her young daughter just a couple of years ago. She described the despair, the feeling of complete hopelessness, and the black hole that almost sucked her in.

Losing a child is an unimaginable tragedy for any parent. Unfortunately, it was but one calamity in a long list for this incredible woman.

She went on to tell us about her childhood, about growing up with her siblings in a rural community.

Her father was a violent man who took all of his anger out upon his wife, and his children. Christine fought back tears as she recounted the beatings, of always being black and blue from bruises inflicted by his hands and feet.

She told us how her mother could only stand back and beg him, “just don’t hit their head or their back”, as he inflicted his rage.

When the children asked their mother why she wouldn’t leave him, she said she couldn’t, that he would surely kill her if she ever did.

Christine expressed the anger she felt towards her father for the abuse, and to her mother as well, for not doing more to spare them all from the violence.

The abuse at the hands of their father took their toll on Christine and her siblings, and she touched on how each of them carried the burden into adulthood.

Christine’s face bore the signs of her rough life. Because of this, it was hard to place her age, but I would think that at least forty years had passed. Christine would find healing, but the scars remain.

Thankfully, Christine’s story didn’t end when she lost her daughter.

As she spoke, I could sense the resilience in Christine. The woman standing in front of us, in all of her vulnerability, was a fighter, and you could tell she knew it, too.

Christine was able to escape the darkness, but she didn’t do it alone. None of us can.

She explained how the folks at Flourish came to her rescue. They became her family, and gave her a home, when she had none.

Their counsellors helped her recover from the loss of her child, and were there for her when she endured yet another assault which almost killed her.

Something We All Need

On the wall behind Christine was a small poster (shown below), which read, “Please take what you need, then pass it along!” At the bottom were a number of “needs” to choose from, that could be torn away from the page.

I noticed the poster when we first sat down, but didn’t give it much thought.

After Christine has finished speaking, and everyone’s tears had dried, one of the people in the group asked, “Which need is missing?”. 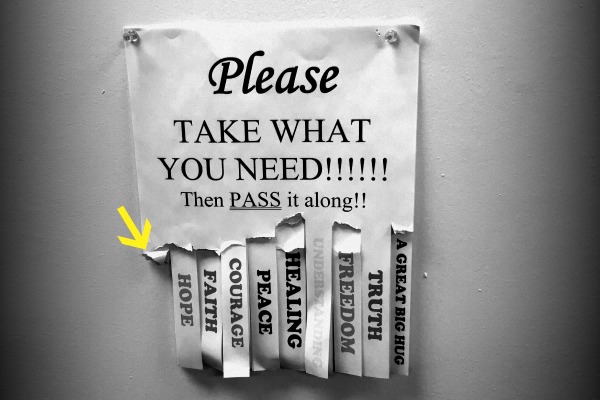 We all looked at the poster, and saw that one word had been completely torn off, the greatest need.

“Love”, said Christine, looking back at the poster.

I smiled to myself. What a valuable reminder of something so simple.

Today, Christine has a place to live, works full-time, and shares her story to groups like ours regularly, on behalf of Flourish. But more than any of that, she is loved.

Everyday, people just like her walk through the doors of Flourish. People who have experienced sadness and despair that you or I may not fathom. Their needs are great;  hope, freedom, peace, compassion, and health.

Yet the one thing they long for is the same thing we all need. Love.